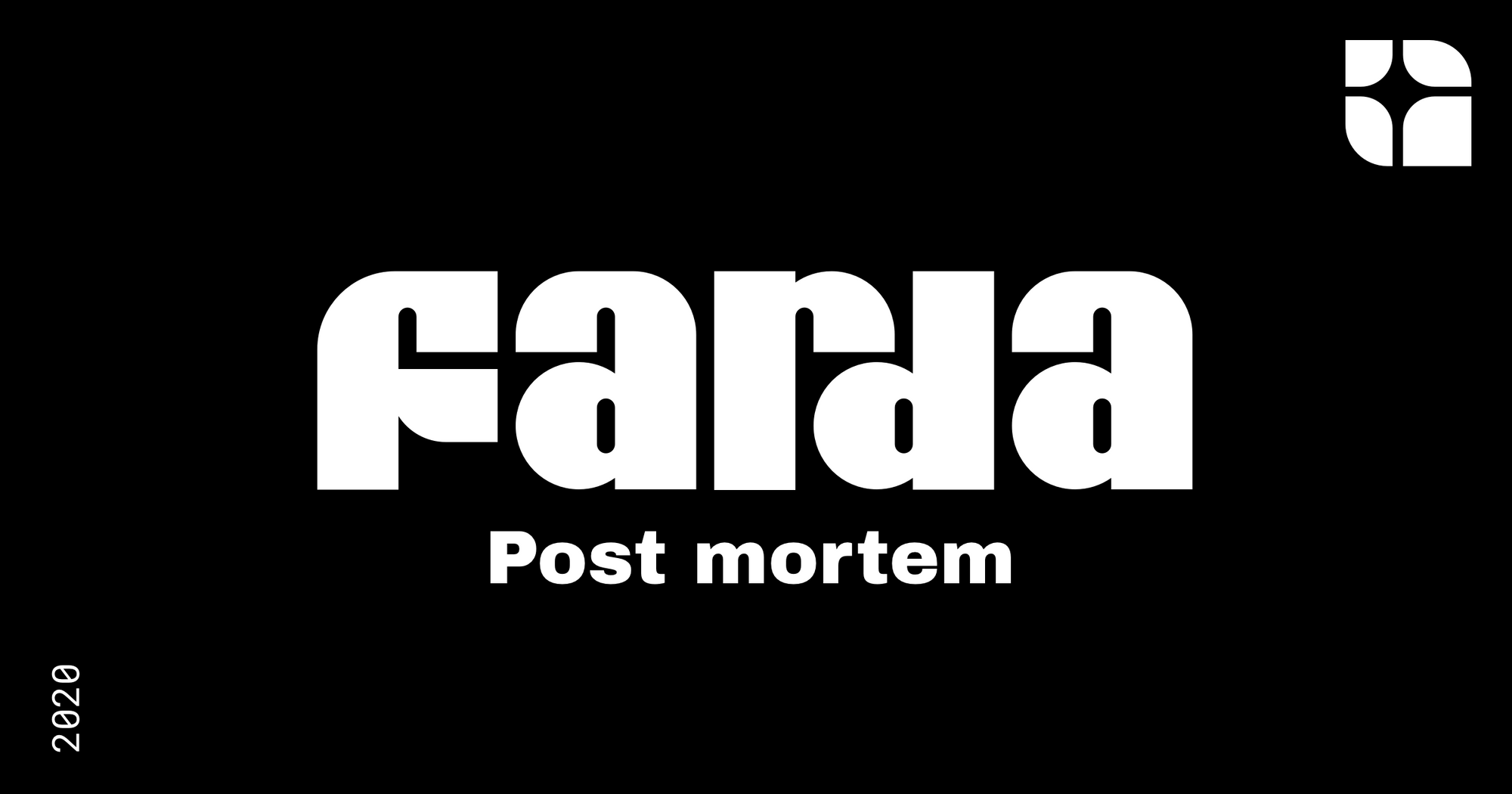 "I have terrible news. We're going to have to close the studio", was the message that I received from the main investor on Monday, April 6th, 2020.

It was referring to Farda, a new video game studio based in Mexico City where we had started working officially in January 2020. Our main project was Tactico, and we had to abandon it just four months after starting it.

The next log is an attempt to create a context, provide documentation and I'd also like to add some clarifications; hoping that this might help someone as an experience or, at the very least, as catharsis during COVID-19 times. 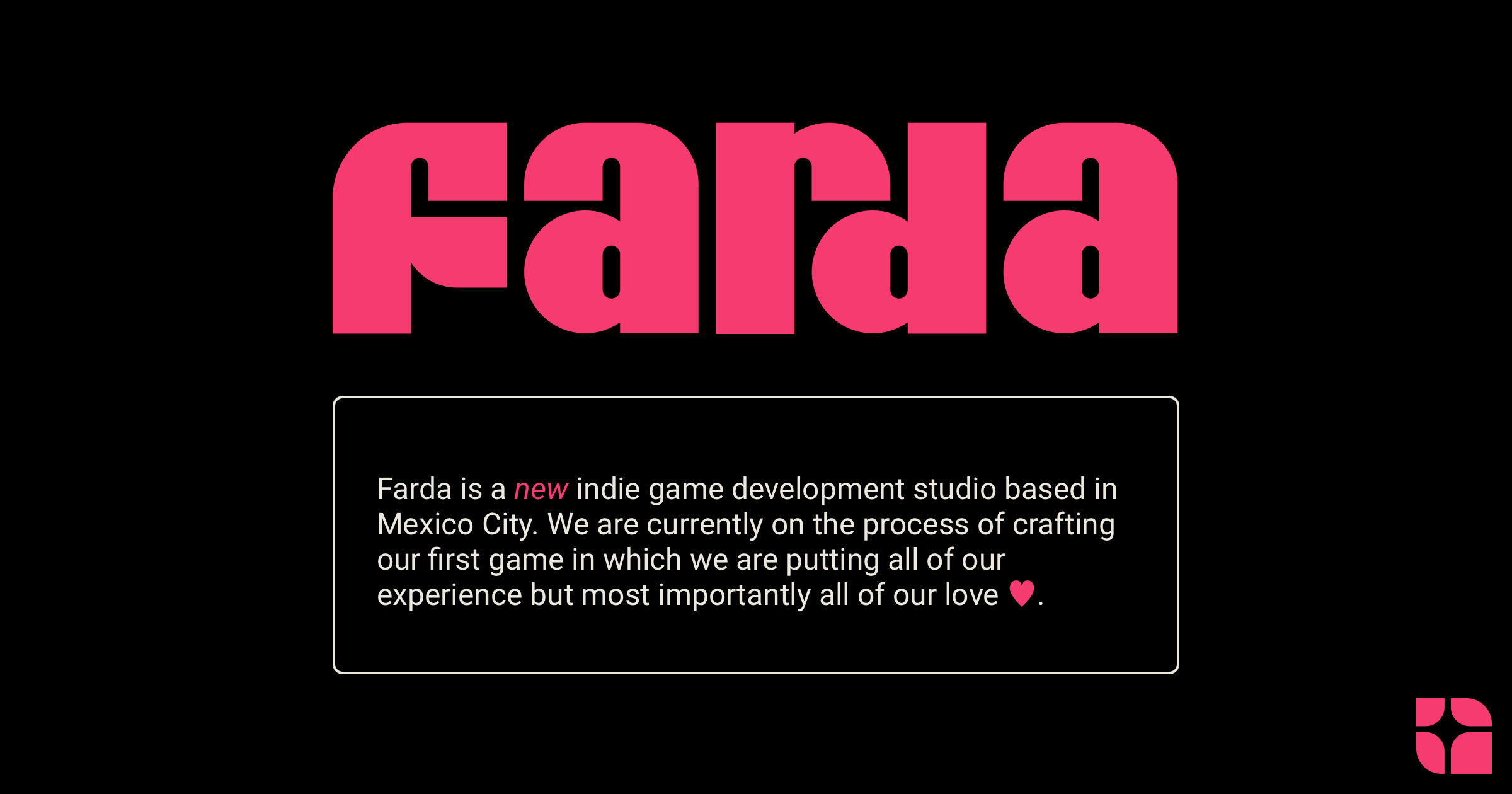 "I have terrible news. We're going to have to close the studio".

Farda was a project that did not start lightly, even though its short life may hint at it; it was something that was first planned in 2018.

After travelling the world and drowning in debt, I came back to Mexico City determined to stay put for a while and try to save up some money. That's how I ended up in a web development job in Aleph, a collaborative platform for risk analysis. It was a rhythm change that I really enjoyed, and it gave me the opportunity to work with some of the best people I have ever met.

During my time in Aleph, we shared office space with other companies, within which was "Draco Studio", a board game studio that has a track record of the best Kickstarter campaigns ever made in Mexico.

When he heard that I had previously worked in video game development, the main investor in Draco approached me to talk to me about his idea: a modern RPG game based on one of his own intellectual properties. The main intent was to make you feel like the king of the universe on top of a dragon. In 2018 and to this day, it sounds like something very difficult to achieve.

The main rule or main advice when you're making your first creative project is: keep a low scope. A game about dragons that fly around an open world does not have a low scope.

Two years later, after long chats about it, I was offered the direction of this new project, with a new objective: to focus on making a video game study that might not have been dragons flying around the world, but I considered it a challenge as big as that. 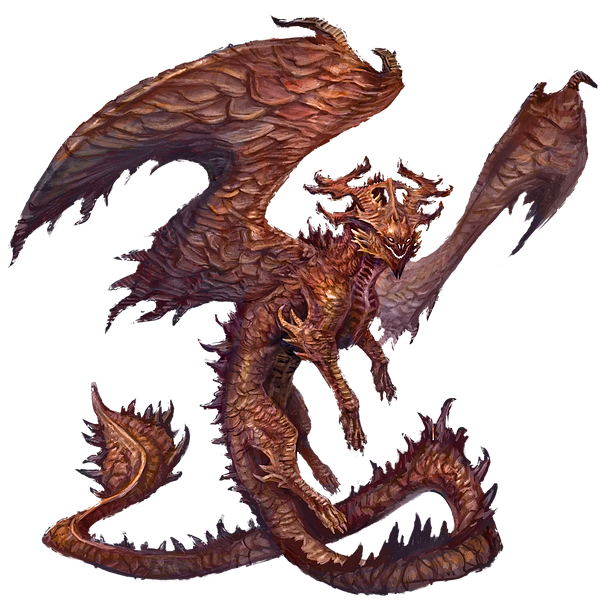 Dehrilya dragon, belongs to the universe of Dragonbond from Draco Studio.

I started working with my partner @conejoconc and we started searching for a team. To make a video game you do not need more than two people: a programmer and an artist, at least at the beginning; so we made a rule of not making hasty decisions when hiring people and working with the bare minimum.

To make a video game you do not need more than two people: a programmer and an artist, at least at the beginning; a wrong move whilst hiring can destroy a team.

At the beginning, our job was to create an environment where we could communicate amongst ourselves peacefully. It became a rule of ours, that we all had to share our space and our schedules, so the team members had to be willing to go to the office daily. We made some hires and created the smallest core. 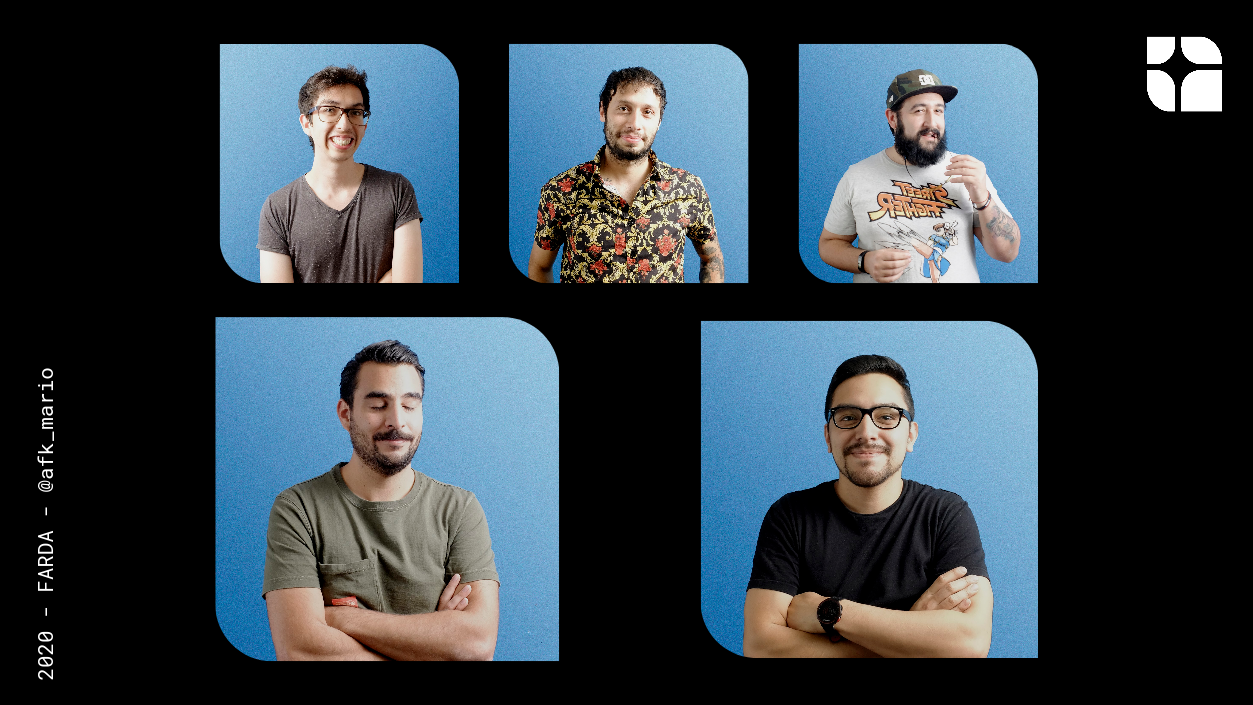 The Farda team, from left to right:

A creative project is built with the work of all of its members.

Defining the workflow and the way to input ideas into the project is only achieved with time and hard work; it is a never ending task. Our plan was to finish a game as fast as possible and after that; we'd understand and learn about teamwork, and we'd allow ourselves to plan a better one for the future. We always try to convey the idea that a creative project is built with the work of all of its members.

That's how we found our first objective, to finish a game before the first half of the year.

Tactico is a strategy game in which people take turns, and it mixes characters and fantasy elements along with futuristic elements; where the synergy between characters is the most important thing for you to plan your strategy. 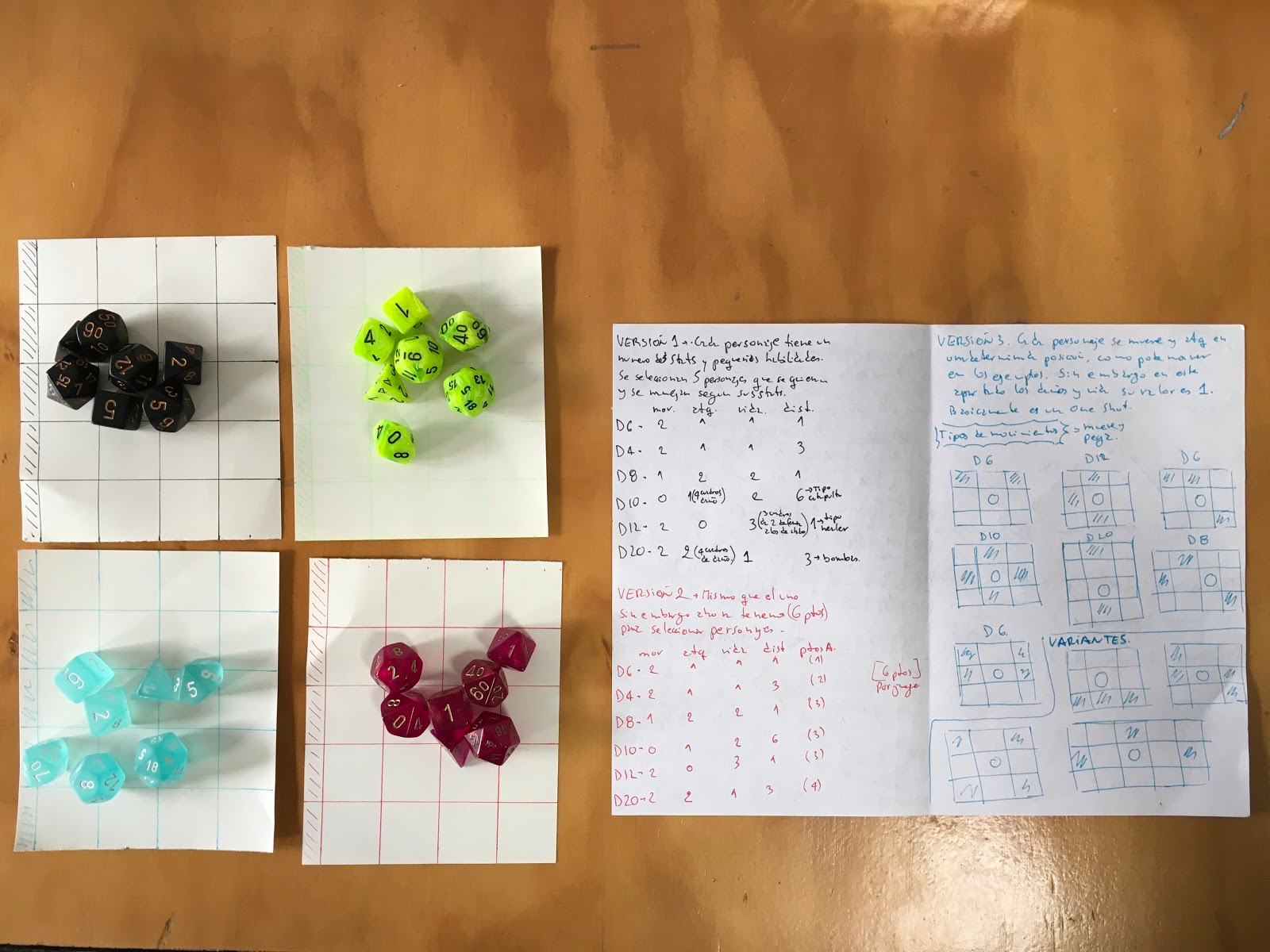 We started with a prototype on paper, this helped us establish the rules of the game so that the whole team could play and we could prove our ideas faster. At first we didn't have a clear idea on what characters we were going to use or what story we wanted to tell, so we focused on building a strong foundation over which we could build more units. 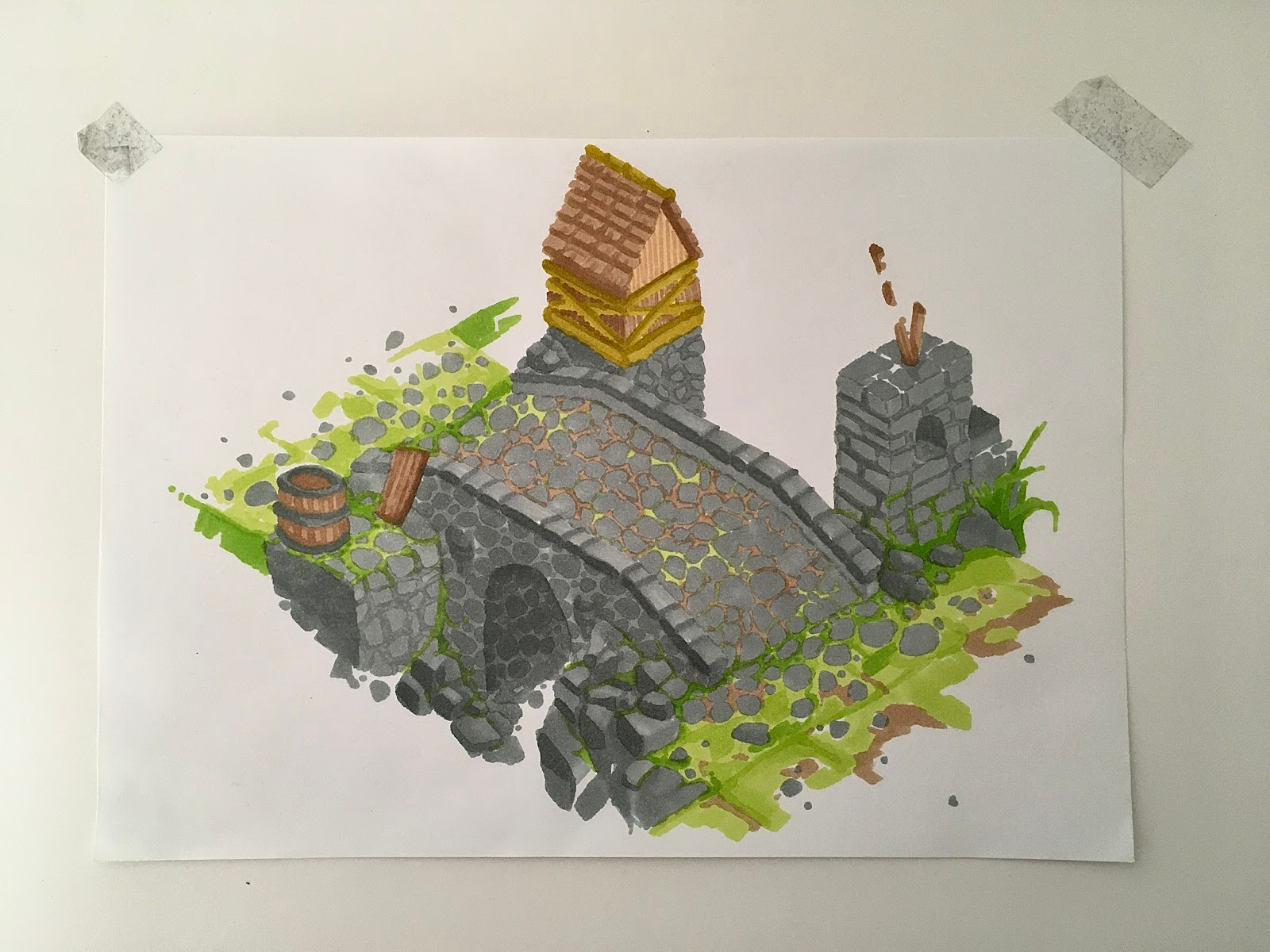 The most important thing when you are creating the first concept art, is to be able to communicate to your team the biggest amount of things in a simple manner using only one image. Everyone has to understand the game, and what everyone needs to do to achieve said concept. 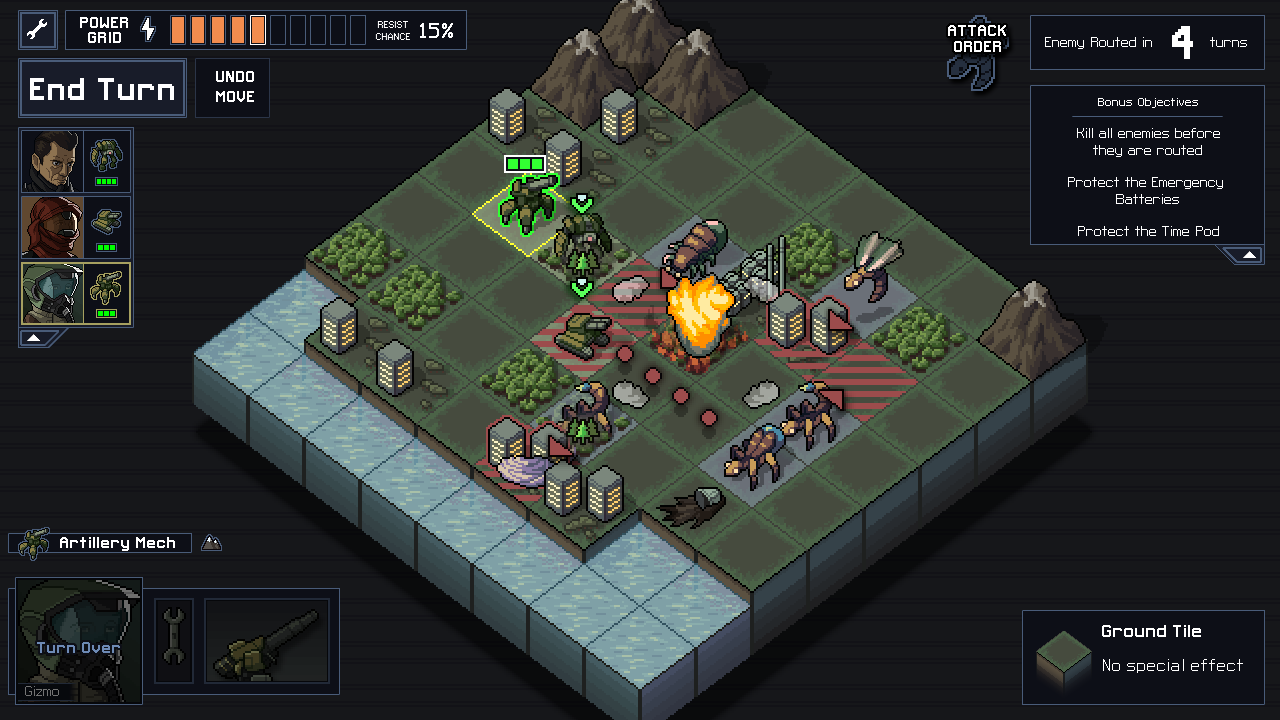 "In to the breach", one of the inspirations of Tactico.

We mixed together different references and we tried to propose how the game would look. After various iterations, we tried with a 2.5D game, in which we could combine the 3D world with the 2D characters. This gave us the freedom to show different things in a small space, allowing the player to rotate the camera. 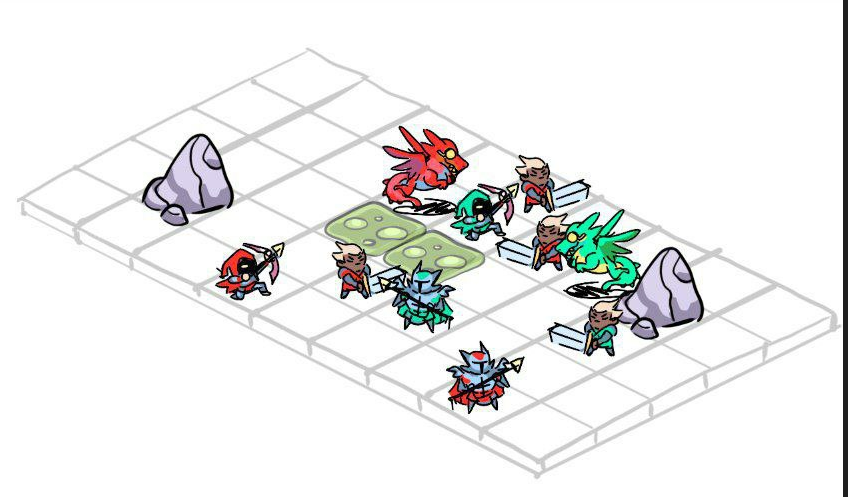 The visual identity of the game was probably the hardest part for us during the development; it was difficult to define the art style of a game that wasn't 100% ours; we had to consider Draco's intellectual property, and we had to keep in mind the needs of the game that we were trying to do. For example, how can you show characters with so many details and features on a screen as small as a cellphone's or a Nintendo Switch's, without relying on a toon or chibi style? 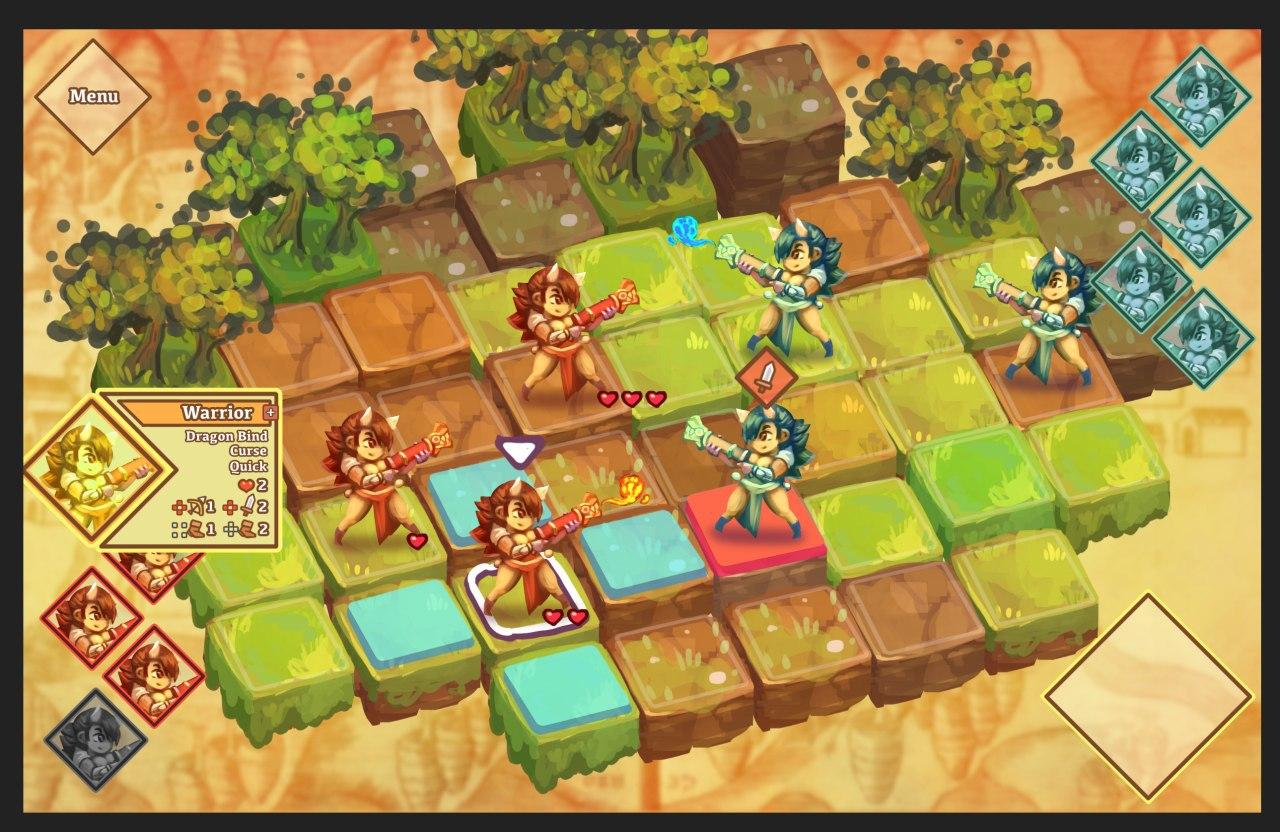 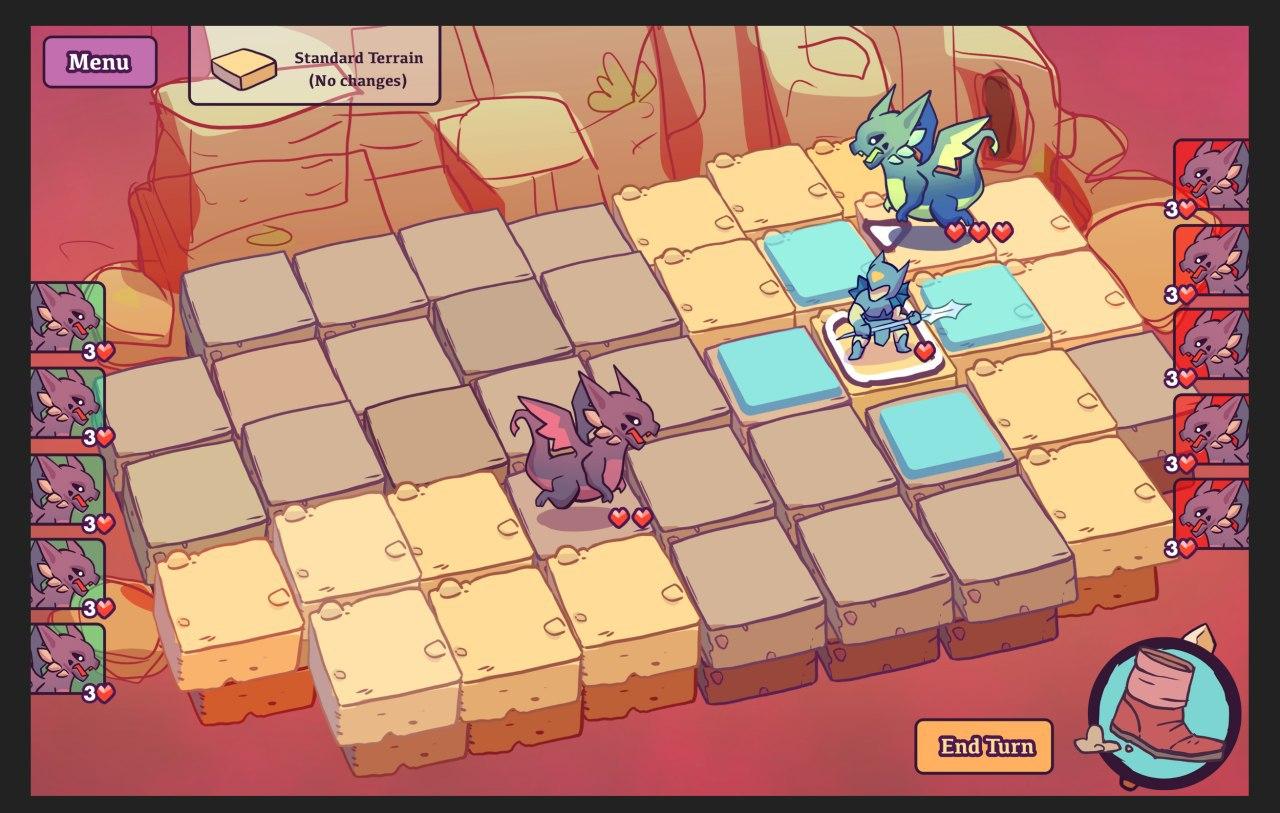 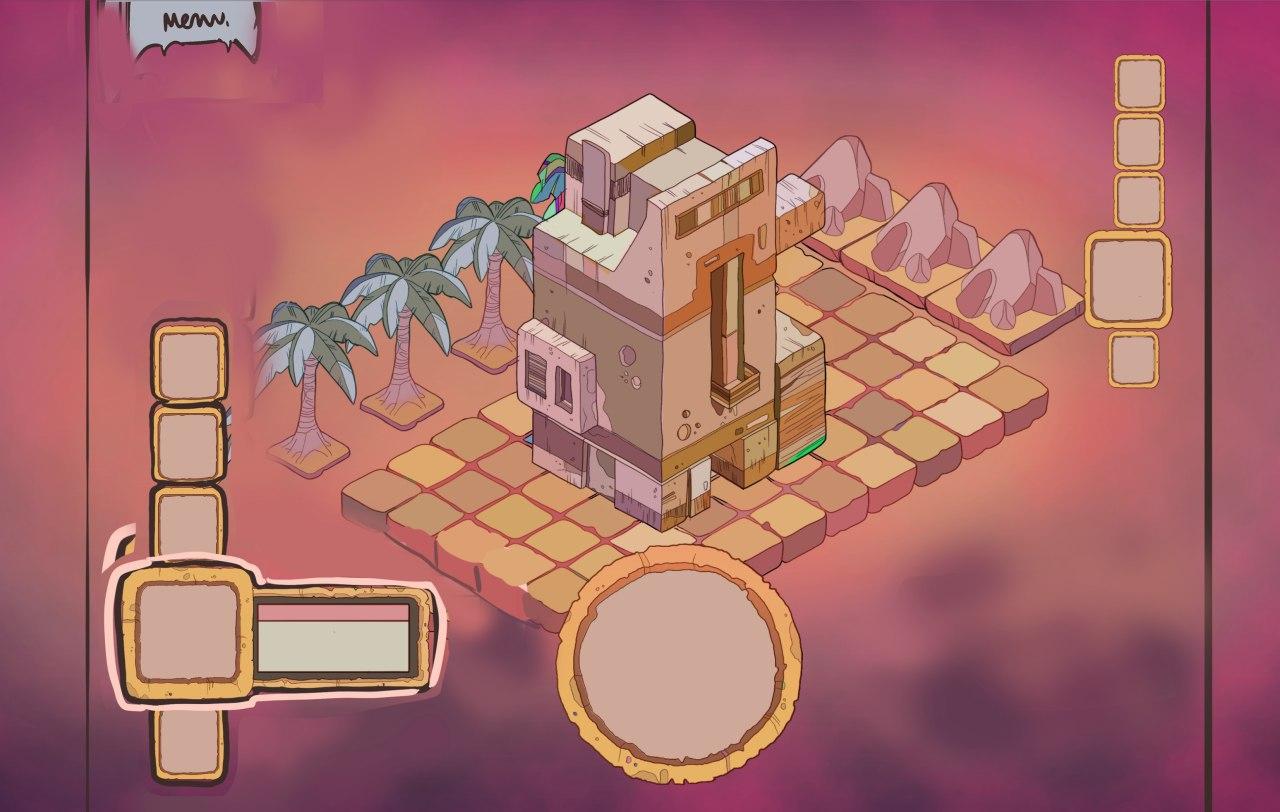 How can you show characters with so many details and features on a screen as small as a cellphone's or a Nintendo Switch's, without relying on a toon or chibi style?

After various iterations, we chose an art style inspired by cyberpunk art combined with high fantasy elements. This fitted into existing game types in Draco, and at the same time we were presenting something interesting that could look good within the game that we had already planned. 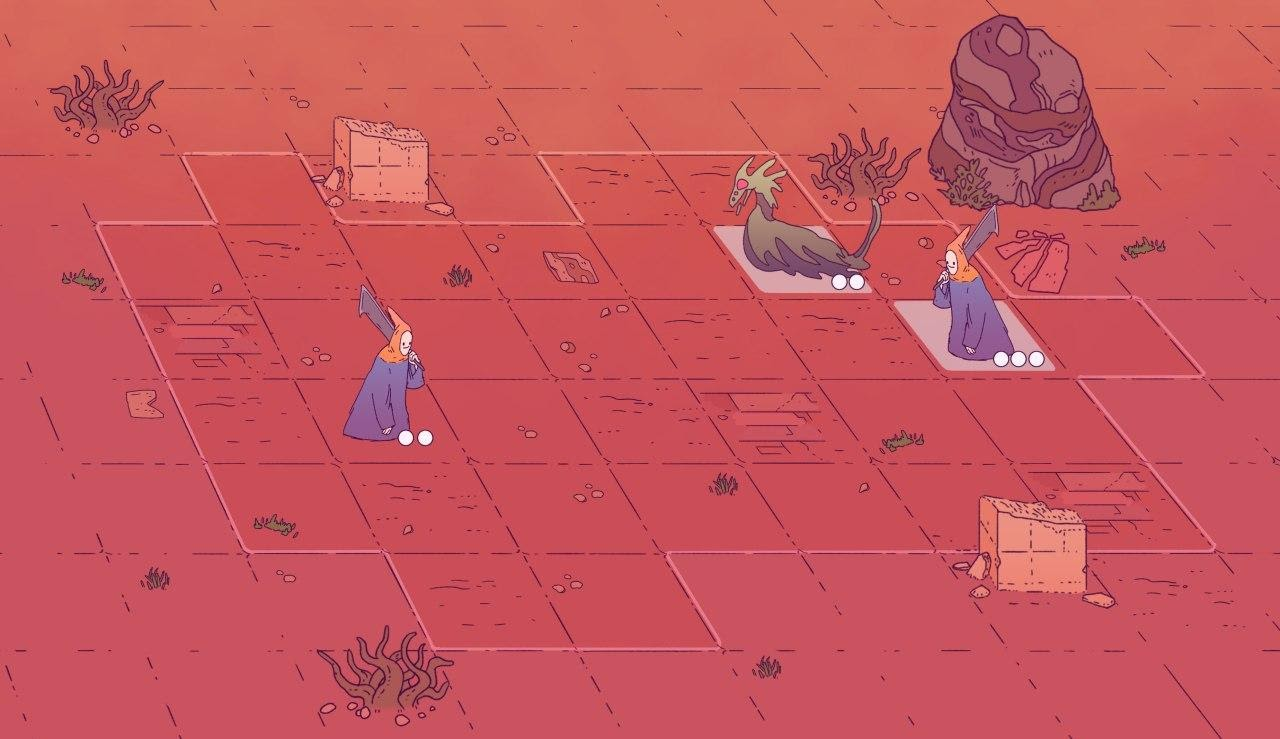 This is an image of the first concept that made us feel excited with the new art style. 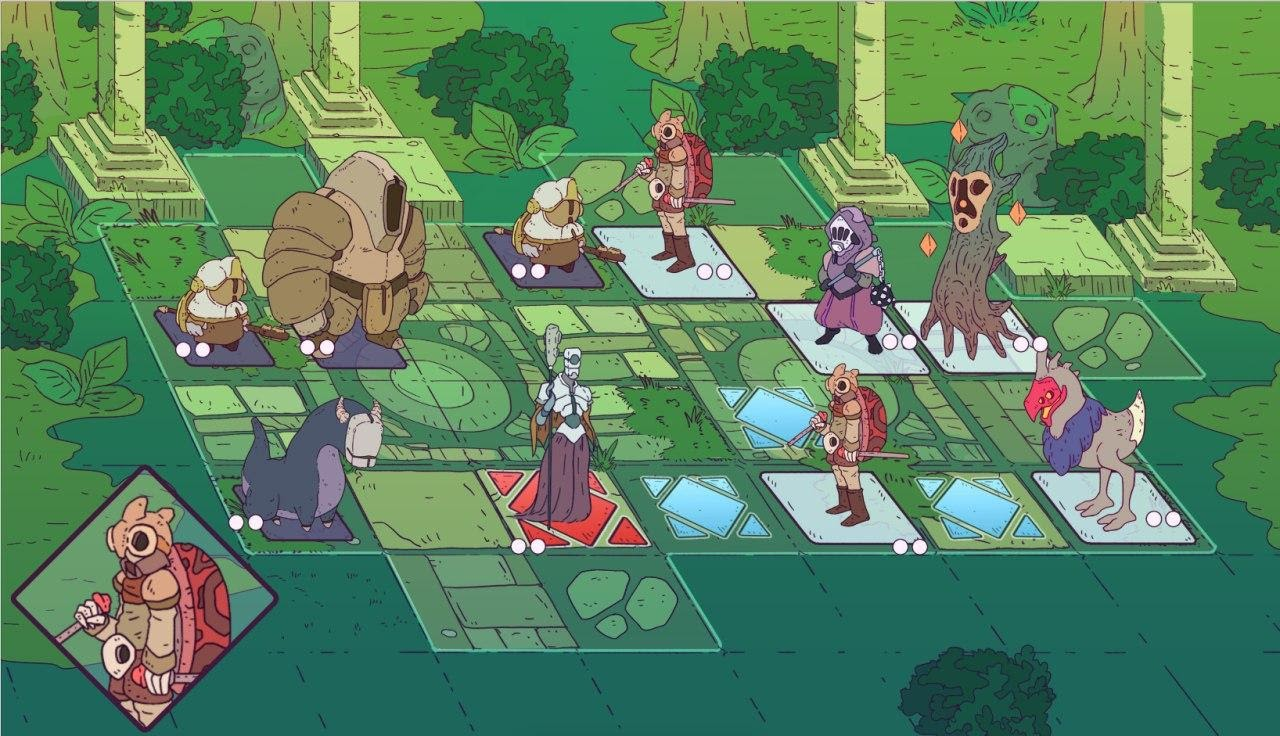 At this moment, we got the opportunity, thanks to @TheMotherBase, to become part of a new proposal for "La Mole" (the biggest comic book convention in Latin America) where various Mexican studios would display their projects. We had approximately a month left to develop a demo that should be ready to be played by the attendants of "La Mole".

We accepted the challenge and got to work. During one month we had intense sessions where we would check everyone's progress every half hour. We ended up very proud of the demo we made for "La Mole", even though it was missing a bunch of things of the game that we wanted to include, it was a great first step and it helped us validate our work as a team.

After "La Mole" we decided that starting that same week, we would each start working from home. The pandemic was getting closer every minute and we didn't want to push our luck.

During the next weeks we adapted to working remotely, and little by little we started fixing all the details that we noticed during "La Mole" and we started to look for new hirings that could help fill the gaps we found.

"I have terrible news. We're going to have to close the studio", after one call, they explained to me that we had an investment that evaporated in light of the oil crisis, the virus, and the terrible economic decisions of the country. It really wasn't anyone's fault; they were circumstances that no one could have foreseen or prevented.

I believe that any project, whether it's a success or not, teaches you something in the end, so here are some of the things that I've learned in no specific order.

Managing a team is not easy. The most difficult part, in my experience, is to have a clear idea about what has to be done. It doesn't matter how obvious it is to you, it's no good if you cannot communicate this to your team.

Your team is everything and it is everyone's job to take care of the team.

Thank you, to the complete Farda team, for giving your very best to achieve what we did.

Thank you, to the whole team at Draco Studios, for their never ending support.

Thank you, to my family and friends who listened to me throughout the process and gave me advice in the nicest ways.

Special thanks to @ElJovenPaul for his advice and support, without him, we wouldn't have been able to make progress at the speed that we did. And we definitely would have made a lot more mistakes.

Thanks to @sockertwits for the incredible visual identity he created with as little time as we gave him.

Honestly, I'm trying to figure it out myself. I think this post-mortem is a first step forward, and a little bit of a closure of a brief but interesting stage of my life. For now, "Detrás del Pixel" will continue to exist, we have some things planned out. I hope you like them.

And about Farda, its official situation is that it is paused until further notice. The opportunity for it to be reborn at some moment when things are more settled in is real; in the meantime, you can subscribe to its social network.

Draco Studios is still working in various projects including a new Kickstarter campaign that just broke a record in Mexico.